A new game that organically emerged from goofing around with the equipment at hand, as we realized that everyone was up for some fairly physical play. It was very fun and natural and completely unrelated to the games that were vaguely planned. Brave soul award goes to Bill (age 73-and-a-half), who was just walking by and gamely joined in.

A line of diverse equipment is laid out some distance from a goal. Gölstrom is a game for a flexible number of people. In each round, the players shoot the equipment at the goalie, in whatever order they want, repeating until all the equipment has been shot. The equipment must be more or less delivered as it is commonly used (a dodgeball thrown, a tennis ball struck, etc.). The goalie is the one who scores points, for pieces that are stopped or miss the net. Two lines, closer and farther, mark the limits for shooting slower and faster-moving equipment. The way we played, all players took turns in goal, but it could also be played team vs team.

Strategies of rushing the goal in waves are definitely useful, and of moving the goalie from side to side. 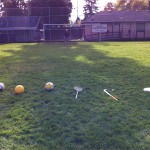 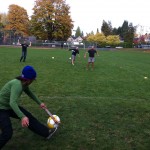 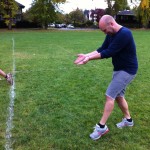