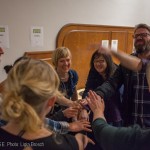 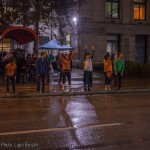 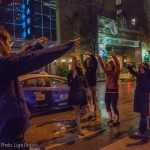 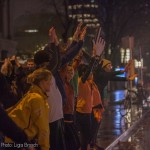 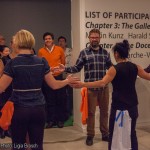 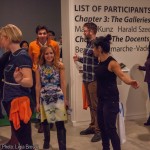 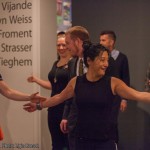 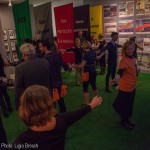 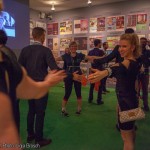 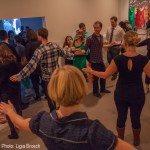 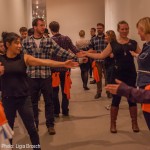 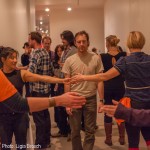 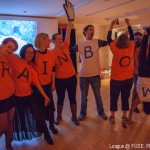 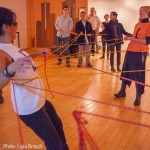 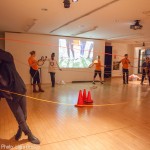 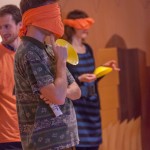 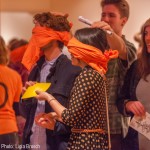 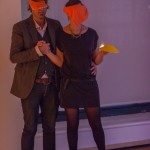 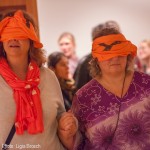 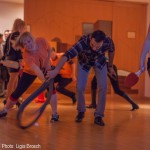 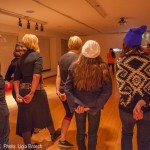 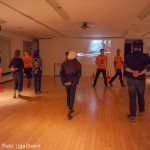 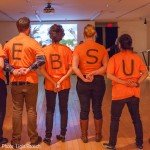 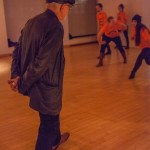 On 29-30 November, League participated in a couple events involving the peculiar dynamics of crowds.

Friday’s “Crowd Studies” was an installment of the Vancouver Art Gallery‘s popular late-night FUSE event, a party that usually involves music and performances in the museum’s galleries. League participated with a couple game-like experiments that played with traffic flow, then an extended play session in one of the galleries.

The first experiment was Meter, conceived by Germaine as a salute to the passing traffic in the form of a stadium wave corresponding to the speed of passing vehicles. The idea was that depending on the traffic conditions, the human wave would sometimes be speedy, sometimes crawling, and sometimes frozen — unlike the reported standard 12m/s of a stadium wave (see Wikipedia and research). Rainy weather and smaller-than-expected lineups outside made the conditions less than ideal, but there were still moments to feel the discomfort of applying that action to unexpected phenomena.

The second experiment, Stanchions, moved from space to space within the galleries, modifying flow each location. The group assembled into a human grid which drew other people in. The grid began by rotating in unison to stanch or permit traffic flow, then gradually fell out of sync, creating changing paths within the crowd. This was an action conceived by League’s friend Sean Smith and previously attempted at our Nuit Blanche version of The n Games. It was intriguing to observe how readily the crowd “played along” with the suggested barriers, whether out of playfulness or a desire to avoid contact.

For the last couple hours of FUSE, we moved into a designed gallery space outfitted with different kinds of equipment that had potential to create interesting social play situations. With this experiment in “crowd studies” we observed the distinct ability for known play equipment to break the ice and get people moving unselfconsciously. We noted that even in social play, the Spoilsport is a real type of player, whose goal is to disrupt others’ enjoyment for whatever reason. We faced the unlikelihood of a crowd to be able, or inclined, to think critically as a group, but experiences that it is nevertheless possible, if unlikely, for a sub-group of people within a crowd to find a feeling of flow and shared focus.

The next day, League participated in a Sports Day in Canada event at the Kerrisdale Community Centre — a very different setting and demographic, but with the similar condition of an impatient crowd seeking entertainment. Again, our challenge ended up being how to encourage a measure of critical thinking within that setting. We ended up doing so by modulating familiar games so that they were unfamiliar enough that they created a challenge.