Francis Alÿs, “The Green Line,” 2005 performance with paint can along border in Jerusalem.

Walking. We might take it for granted, but it is one of the ways in which individuals know, shape, and give meaning to places. Walking is an everyday tactic that bends the city toward unplanned ends (Michel de Certeau). It’s done for political reasons, for pleasure, for meditation. “Walkers are ‘practitioners of the city,’ for the city is made to be walked.[...] Just as language limits what can be said, architecture limits where one can walk, but the walker invents other ways to go,” wrote Rebecca Solnit in Wanderlust: A History of Walking.

The next League play date turns on walking. How does the environment around us affect how we understand our possibilities for action, and could our movements through the city shift those habits and conventions?

We’ll workshop some ideas from League regulars Jay White and Leah Weinstein, and of course adapt as we go. Bonus points if you arrive on foot.

League regular Bruce Emmett brought some of his International Baccalaureate art students to the field house to workshop some games. In their class they have been developing games as an exploration of creative procedure, dubbing the exercise “Little League”.

We play-tested one of the two game ides they brought, and began to develop another from scratch. 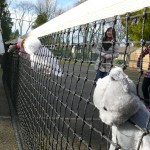 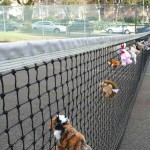 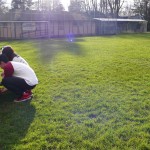 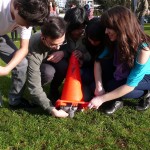 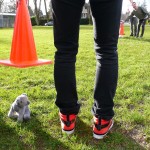 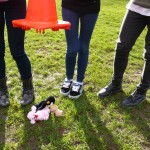 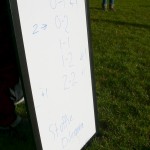 This was a game they had already discussed quite a bit, but had not yet tried playing. Kathleen, who had the initial concept, explained the guidelines they had developed as a group:

Character of the game

Although we were pressed for time, we also wanted to try to develop a new game from scratch. Since we had the quantity of stuffed toys on hand, Germaine suggested some kind of game starting from the basic game theory scenario known as the Prisoner’s Dilemma. Game theory is concerned with strategy and decision-making, and The Prisoner’s Dilemma is used as an example of a situation in which two players choose to cooperate or betray the other. In its classic formulation, two criminal accomplices are separately offered a deal: turn on the other by confessing and go free while the other is punished to the maximum; stay silent and receive a small punishment; or if both confess, both be punished but less than the maximum.

There are many variations of the prisoner’s dilemma. We came up with one, not unlike the dilemma a child might actually face, in which she must decide whether to share her toys, with the possibility that too-reckless generosity might be ‘punished’ by having her toys stolen by the other. Instead of gauging punishment, the two sides were essentially betting a finite resource. We had two teams start with a quantity of toys, and based on the combinations played, toys were taken or given to the other side. It was far from resolved as a game, but served as an exercise in considering how cooperation and selfishness might be weighed and valued.