League is launching in Fall 2012. We’ll be based at Elm Park in Vancouver, thanks to the Vancouver Park Board Studio Residency Program.

Here’s how the project is envisioned:

League will be a changing group of people who gather regularly to play sports and games invented by themselves or conceived by members of the public. League members will attempt to play with the suggested guidelines/equipment/space, and will further develop the game as they play, with the expectation that it will evolve, and strategies emerge, through trial and improvisation. The advantages and weaknesses of different approaches will emerge and be incorporated organically into the play.

Commonplace sports and play equipment, markers and everyday objects will be available, and new tools might be invented on the fly.

League will be a sort of sandbox for experiments around improvisation, performance, co-operation, and strategy. The process of learning, adapting and evolution through iteration is central to the overall concept. The project is founded in a belief in the value of emergent behaviour and the process of making sense of things. It views games, sport and play as serious forms of problem-solving that may be more complete than approaches which privilege the mental over the physical. League might attract participants who are adaptable and have a tolerance for (or even attraction to) uncertainty, provisional process, negotiation, and unconventional approaches to problems. They may or may not identify as athletes, but are expected to bring all faculties of the mind and body to their play. 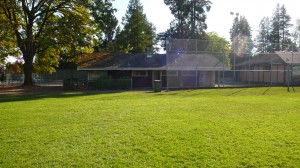