Everyone was asked to bring a stick of some kind, and it was a funny sight to see people arriving at the field with brooms, umbrellas, lacrosse- and hockey sticks, branches, a mop, and a piece of bamboo. Others pulled out chopsticks and sticks of Juicy Fruit.

The idea behind the vaguely-worded stick request was to start us thinking about how games can stand in for real life activities like probing, battling, moving things, or navigating; how sports and game equipment might have originally been adapted from tools or objects at hand; and about the potential for all kinds of things we have lying around our homes.

After warming up by trying to figure out the mechanics of the traditional native game called Double Ball, we started by thinking about a game suitable for people of all ages. 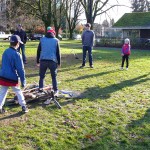 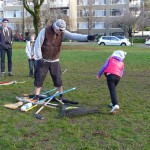 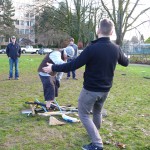 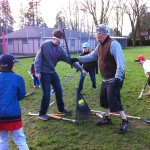 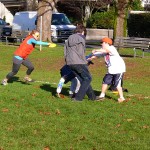 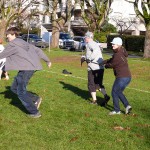 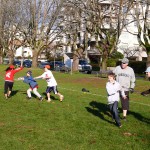 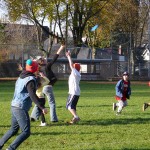 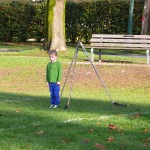 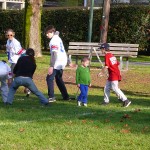 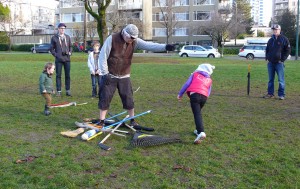 I’ll tentatively call it Sonic Pick Up Sticks, but if someone has a better name, please suggest it.

The basic idea is to sneak around a blindfolded person, collecting objects from around him or her. You are safe unless s/he hears and points at you.

This game changed a lot, as we figured it out, even reversing its basic direction. 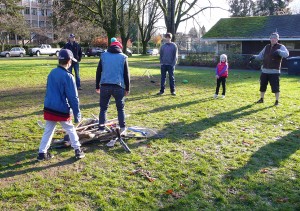 Note that the advantage may have been more with the blindfolded person if this game were played in a quiet space rather than a city park.

Most people naturally tried slow sneaking, but League regular Bruce did successfully pull off one run-and-grab. Wyatt tried faking out the blindfolded person by throwing his hoodie to a different part of the circle. As with regular pick-up sticks, placement makes a difference to difficulty, but in this version the shape and material of the sticks also was a factor.

This game came about by attempting to craft something that would be suitable for young children and adults. It was interesting that it ended up creating what felt and looked like a vulnerable situation for the person in the middle, physically hampered and blinded. It was also somewhat unusual in that it privileged slow, quiet movement and careful listening. Perhaps the advantage of young ears was balanced by the elders’ patience. 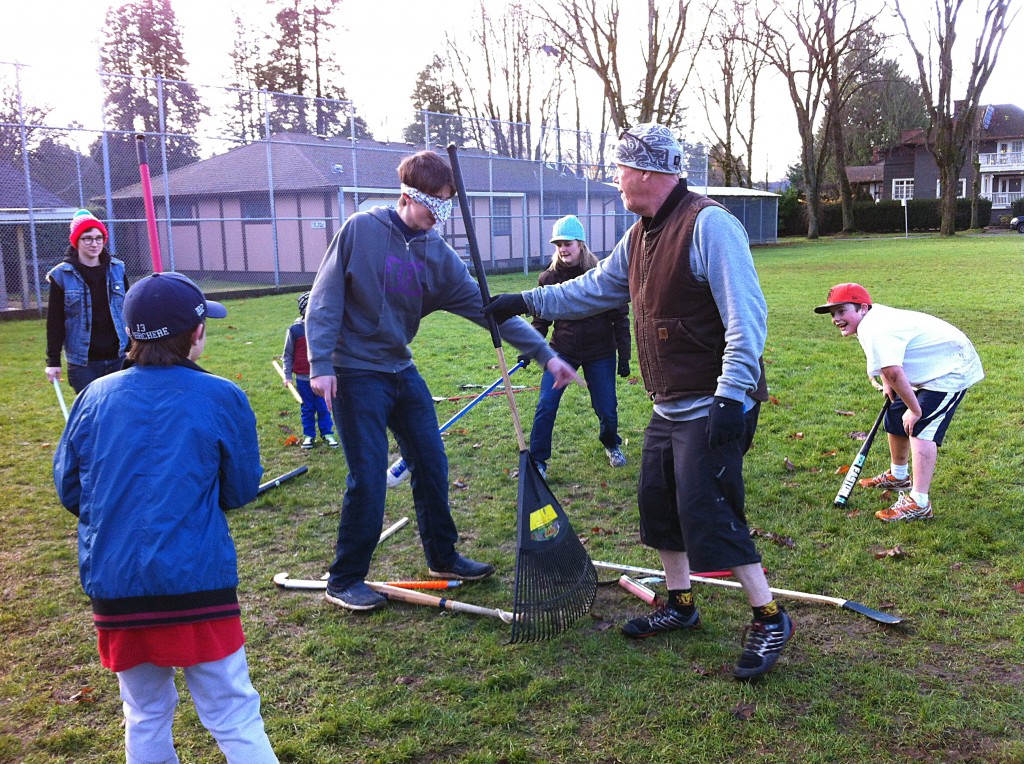 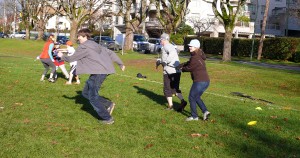 Field Pong was a partly-formed idea brought by Germaine. The idea is that, like Pong, players form blocking lines to deflect balls — in this case runners — who are trying to score points.

Two teams face each other, with a number of other people as runners. The teams form walls by holding any of the sticks. A wall must include at least two people holding the stick at all times. A number of cones are set on the end lines, representing points to be scored by the runners. The runners have to stay in bounds, and must change direction (running towards the other end line) when they are touched by a wall, or they reach an end line, or they grab a cone to score a point. They can move side to side but cannot backtrack. They can score points on both end lines. 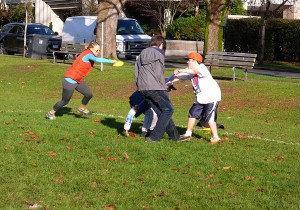 There was some very intense running, dodging and diving, with not everyone following the guidelines about running direction. Semi-cooperative strategies emerged when runners approached simultaneously, so that the walls had to choose one or the other.

The way we played it, this game has an unusual structure in that there are essentially three teams: one defending each end, and the runners trying to outscore each other. If played again, we could try to make those fixed teams that rotate between the positions.

It has potential, but the functions would need to be clarified. We could further the rare situation of a team game involving three teams by finding a way to make it worth it to play effective defense. Alternately, we could modify it so that there are only two teams, with runners from each team.

Ian brought this idea for a cross between Ultimate and cricket. The goals were three sticks of equal length propped together as a tripod. First we tried short sticks, but quickly switched to hockey sticks. One point was given for knocking over the tripod with the frisbee, and five for landing the frisbee on the ground inside the goal. There were no field boundaries, but when you had possession of the frisbee you couldn’t take steps. 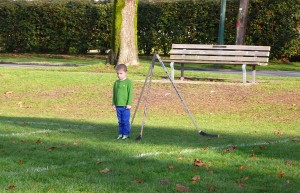 This initial play was a lot of swarming around after the frisbee, but would probably develop into something more positional (and more efficient) with more play. We started with a soft, kid-friendly, but erratic frisbee, but as soon as we switched to a standard frisbee the positioning spread out. 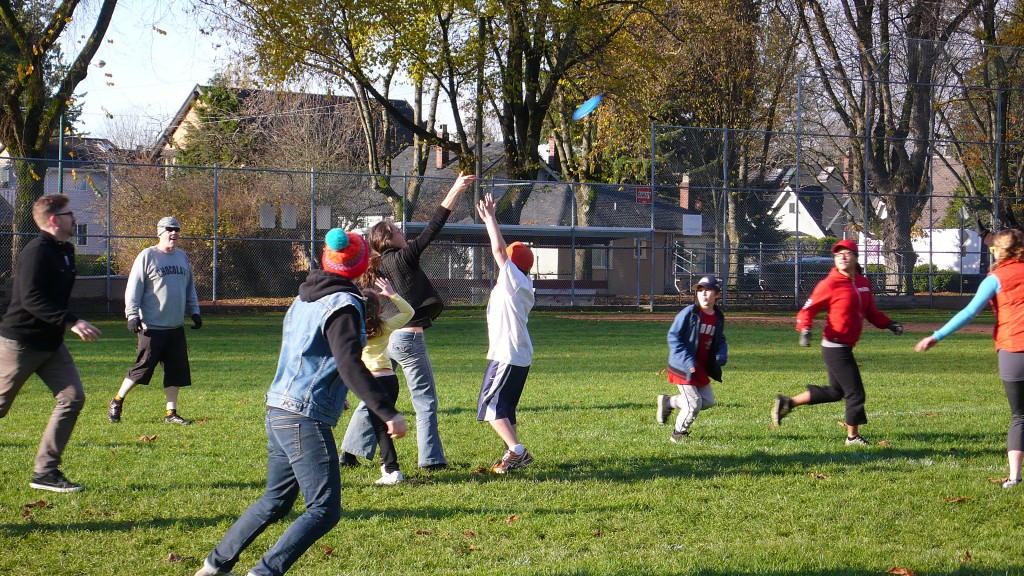