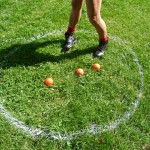 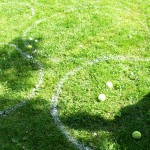 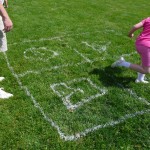 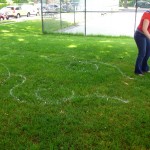 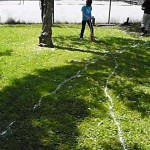 Blindfolded kids trying to walk to fence and back with field-marking guns, Vancouver Draw Down 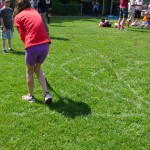 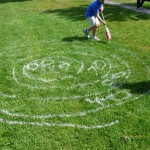 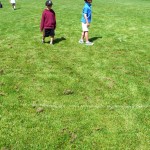 This kid had a very clear plan. Vancouver Draw Down

The start of a game involving happy, sad and angry zones. 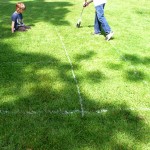 This kid started with extremely straight lines. The next kid took it in a different direction. Vancouver Draw Down. 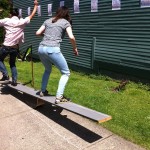 Teetering at the Western Front 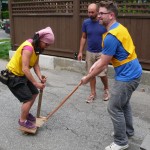 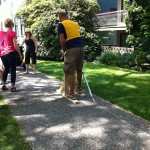 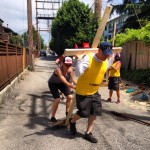 Skaters of the Cross. League at the Western Front. Photo by Stace Synkiw. 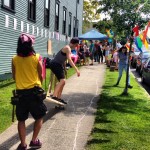 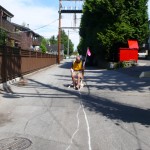 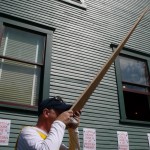 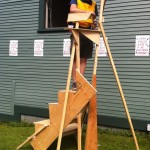 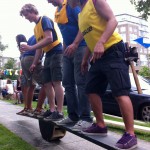 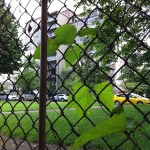 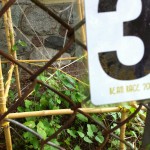 For this city-wide drawing day, we had the idea of walking or running with the field-marking equipment to spray-chalk new fields for play, which would in turn suggest the games to be played. Many participants had not experienced drawing on that scale, or the seeming “responsibility” for configuring space themselves. But hesitations were quelled through encouragement, and more than a dozen drawings were laid out on the field, with the beginnings of games emerging from them.

Petri
One of the games — Petri — offers something potentially new to the pantheon of bocce-like games. It began with Danita spraying a number of circles with the radius of her reach. Through various iterations of tossing balls and other objects, we eventually developed a coherent narrative for the game: the circles as petri dishes and the balls as viral agents. In order to score, your circle(s) must be pure, containing only one type of ball particle. If it becomes inoculated/contaminated by another agent, it does not count. Scoring is also viral, through multiplication of the numbers in each player’s pure circles. For example, if one player ends with two circles, each containing two particles, she scores 4 (2 x 2). If the other player ends with one ball in each of five different circles, she only scores 1 (1 x 1 x 1 x 1 x 1). The potential for exponential, runaway scoring opens up a lot of strategic possibilities.

Play building at the Western Front

Coinciding with Main Street Car-Free Day, pioneering artist-run centre Western Front was celebrating its 40th anniversary with an open house featuring interactive projects in and around the building. League dove into the Front’s stocks of old construction materials to build improvised play tools and structures, including:

Bean Race 2013 report: as of mid-June, the Team Gropp’s is far ahead in terms of sheer volume of plant material, but the kids of League have a slight edge in altitude. Insects or other plant-munchers are proving to be an issue for the sprouts that haven’t yet reached escape velocity.