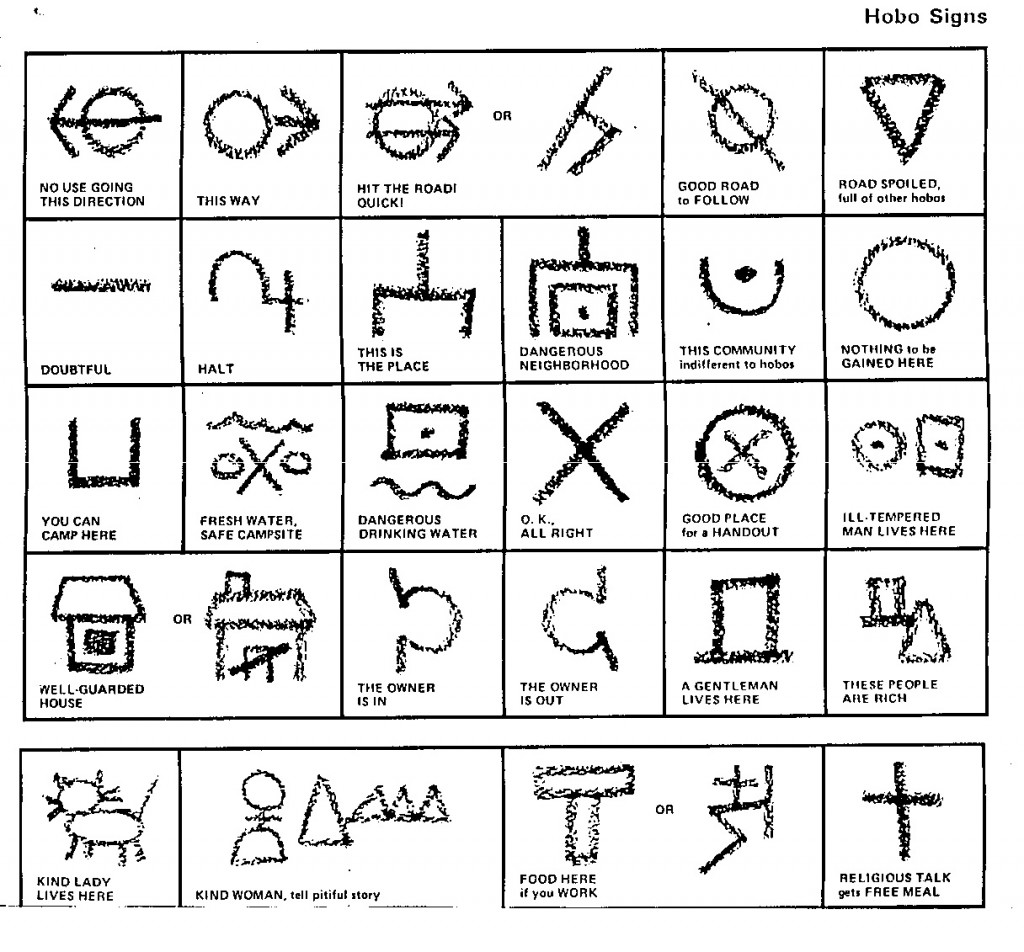 This month’s League play date celebrates Family Literacy Day with games related to signs and signals. The challenge could be to develop an updated set of hobo signs. It could be to play a game whose rules are unspoken, or one in which tools change meaning. It could be an experiment with different kinds of flags. As usual, the games will change and develop as we go. Contact us if you have ideas, or just come prepared to improvise. 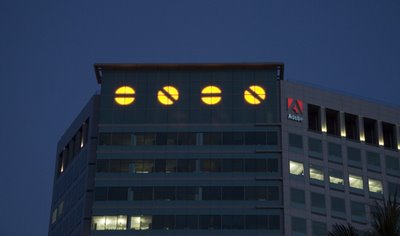 Ben Rubin’s “San José Semaphore”, a code-based artwork atop Adobe’s HQ. Anyone can attempt to crack the code.

League is an open gathering for playing invented games and sports, to experience improvisation, performance, strategy, and critical thinking as play.

Literacy isn’t only about language; it’s about learning and problem-solving. This Family Literacy Day edition of League is organized in collaboration with Decoda Literacy Solutions. Their blog includes ideas and references for learning by playing together, including physician Stuart Brown’s inspiring TED talk about the importance of play to human development and intelligence:

Some TED talks on questions of play, games, improvisation, iteration, and innovation.

Stuart Brown: Play is more than fun
“A pioneer in research on play, Dr. Stuart Brown says humor, games, roughhousing, flirtation and fantasy are more than just fun. Plenty of play in childhood makes for happy, smart adults — and keeping it up can make us smarter at any age.
“Stuart Brown’s research shows play is not just joyful and energizing — it’s deeply involved with human development and intelligence.”

Mihaly Csikszentmihalyi: Flow, the secret to happiness
“Mihaly Czikszentmihalyi asks, “What makes a life worth living?” Noting that money cannot make us happy, he looks to those who find pleasure and lasting satisfaction in activities that bring about a state of ‘flow.’
“Mihaly Csikszentmihalyi has contributed pioneering work to our understanding of happiness, creativity, human fulfillment and the notion of “flow” — a state of heightened focus and immersion in activities such as art, play and work.”

Tim Brown: Tales of creativity and play
“At the 2008 Serious Play conference, designer Tim Brown talks about the powerful relationship between creative thinking and play — with many examples you can try at home (and one that maybe you shouldn’t).
“Tim Brown is the CEO of the ‘innovation and design’ firm IDEO — taking an approach to design that digs deeper than the surface.”

Jane McGonigal: Gaming can make a better world
“Games like World of Warcraft give players the means to save worlds, and incentive to learn the habits of heroes. What if we could harness this gamer power to solve real-world problems? Jane McGonigal says we can, and explains how.
“Reality is broken, says Jane McGonigal, and we need to make it work more like a game. Her work shows us how.”

Jane McGonigal: The game that can give you 10 extra years of life
“When game designer Jane McGonigal found herself bedridden and suicidal following a severe concussion, she had a fascinating idea for how to get better. She dove into the scientific research and created the healing game, SuperBetter. In this moving talk, McGonigal explains how a game can boost resilience — and promises to add 7.5 minutes to your life.”

Gabe Zichermann: How games make kids smarter
“Can playing video games make you more productive? Gabe Zichermann shows how games are making kids better problem-solvers, and will make us better at everything from driving to multi-tasking.”

Steve Keil: A manifesto for play, for Bulgaria and beyond
“Steve Keil fights the ‘serious meme’ that has infected his home of Bulgaria — and calls for a return to play to revitalize the economy, education and society. A sparkling talk with a universal message for people everywhere who are reinventing their workplaces, schools, lives.”

Isabel Behncke: Evolution’s gift of play, from bonobo apes to humans
“With never-before-seen video, primatologist Isabel Behncke Izquierdo (a TED Fellow) shows how bonobo ape society learns from constantly playing — solo, with friends, even as a prelude to sex. Indeed, play appears to be the bonobos’ key to problem-solving and avoiding conflict. If it works for our close cousins, why not for us?”

The end of the year seemed to beg for a cyclical theme. We tried out three different games. 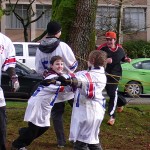 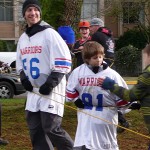 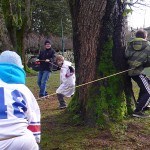 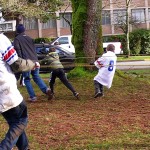 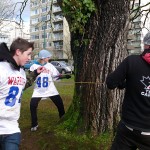 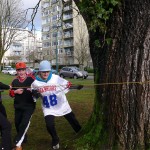 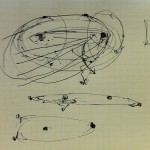 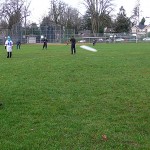 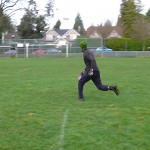 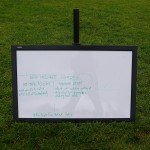 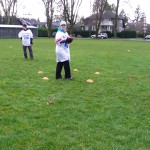 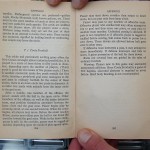 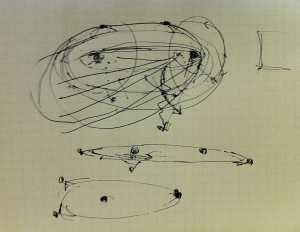 Sketch of ideas for the game that would become Cyclada

Germaine had been thinking about a game (1) in which the playing field would change shape, and (2) that would make use of the two huge maple trees that stand outside the field house. She had vague ideas about a field in which the two trees would be the foci of an oval, and conceived of a game that used the trees as bases and a rope around the trees, which could be pulled by players in order to deform the field. “Sort of a cross between cricket and tug-of-war” was the shorthand description.

Starting with a 100-foot rope that gave a good amount of slack around the trees, this game developed a lot through play. The initial concept was to use a ball, either kicked or thrown by the runner, to start the play. The scoring would continue until the runner either was put out by the ball, or couldn’t run around the bases (trees) because the defense had used the rope to cut off the running path. First we switched to a ring frisbee, to echo the shape of the field, and attempted to put the runner out by hitting one of the trees with the ring. That proved incompatible with the equipment, so we considered outlining a smaller area that would be used as a target for the ring, and tried an additional post onto which the ring could be dropped to put the runner out. However, those solutions were too fussy. It made more sense to use less equipment, so we finally settled on having a frisbee thrown by the runner, with the runner being thrown out by the defense hitting one of the trees with the frisbee thrown from the other tree.

In terms of actions allowed and disallowed, it quickly became clear that we’d have to set some limits on how players could use the rope, so the first rule — don’t hurt the runner — was soon joined by restrictions on blocking: not grabbing other players, not crossing the rope, not grabbing the rope in two locations.

The name of the game evolved from word play: cricket became cicada became Cyclada, in honour of its cyclical character. 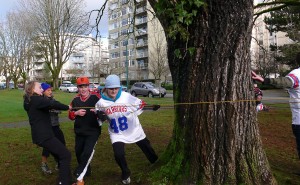 We finished the session with the following provisional rules:

Cousins Derik and Ryan quickly invented the multi-player block, which was so effective it had to be disallowed. We also soon realized that twisting the rope would make it impossible, so that was also nixed. We did, however, allow the rope to be pulled to one extremity and then wrapped around one of the trees to make passage impossible; that was judged to be a failure of offense, not of the game’s mechanics.

It could be interesting to play this again without the frisbee element, only using the rope as the means of controlling the number of points scored on each turn. 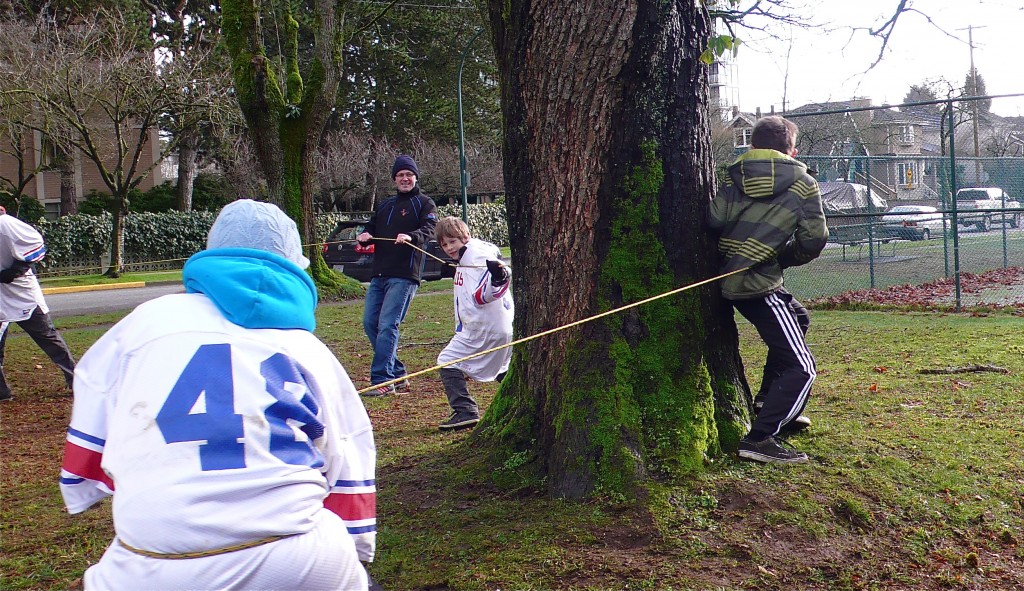 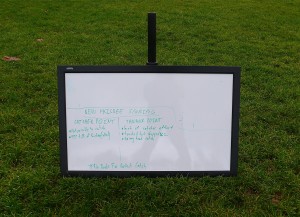 Pro mountain biker Ryan Leech brought a couple games from The Ultimate Athlete by George Leonard, a book dating from the participatory New Games movement of the 1970s. The interesting character of this game became clear even as Ryan was reading out the rules. Yes, it was based on scoring, and yes, it assumed everyone was capable of playing, but what was interesting is that the players have to judge their own ability to play, a maximum effort up to that ability limit is required, and “perfection is expected and thus not extrinsically rewarded.” It set up an interesting situation in which one’s honour was on the line not only in terms of effort, but also in honesty when assessing and admitting one’s abilities.

The game is played between two players to 11 points, with throwing and catching roles changing when the active thrower reaches 6 points. The thrower and catcher each have to declare which hand they’ll use to throw and to catch the frisbee. As long as the thrower throws the frisbee in a way that is catchable by the catcher, and the catcher succeeds in catching with the hand he declared, there are no points scored. Points are scored by the catcher when the thrower fails to throw the frisbee in a way that is catchable by the maximum effort of that catcher, or throws it at a greater than 45 degree angle. Points are given to the thrower if the catcher “fails to make an all-out effort”,  uses the wrong hand, or drops or bobbles the frisbee.

This game effectively gave purpose to may sometimes seem like an aimless pastime. The sportsmanship aspects were really interesting, as individuals had to adjust to different abilities and acknowledge their own abilities. Strategically, the game well played would seem to favour the thrower.

The second game from Leonard’s Ultimate Athlete was Circle Football. Instead of a sport moving back and forth between goal lines, this variation on American football has a small inner circle inside a much larger circle. The goal zone is outside the large circle, and an additional corridor leads outward from the inner circle to the goal zone. The passer stands in the inner circle and has 15 seconds to pass to a teammate or begin to run the corridor to the goal zone. Unlimited passing is allowed once the ball has been passed. The offensive team has three tries to score before turning the ball over.

We didn’t spend enough time to develop a good sense of this game, but George Leonard’s description of it as “tricky and particularly exciting” and requiring “360 degrees, all-around alertness” seems apt. 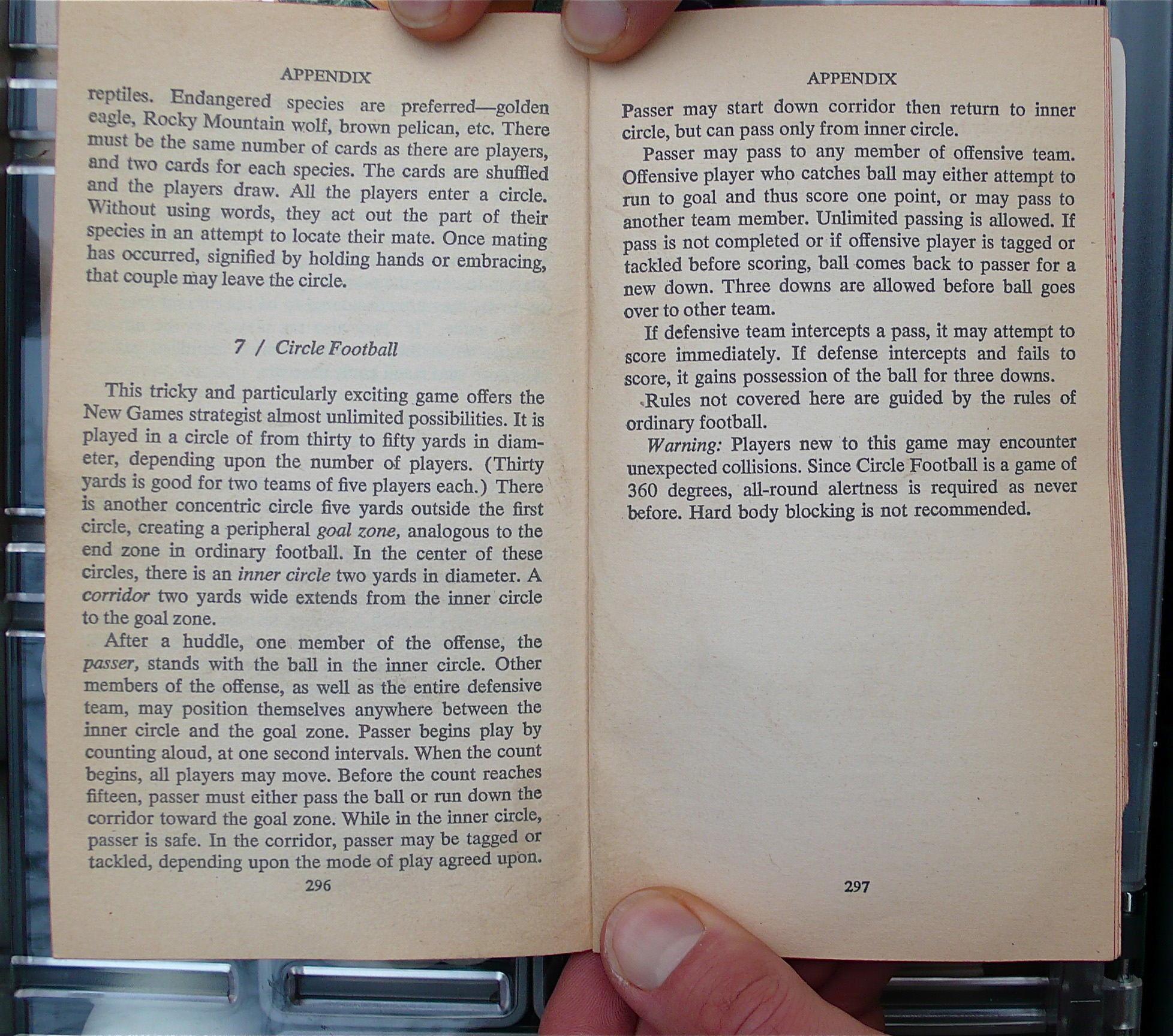