Sportsmanship — The Art of the Game, by Louise Rusch

Sportsmanship — The Art of the Game

Aristotle defined a worthy life as embodying “intellectual and moral excellence” (Feezell 136). The art of sport is about a performance that can only be achieved through a highly disciplined and focused process. A quick search can list the achievement history of any sport, but there are some sport stories that are mythologized in academic research and popular media. These stories are treasured because they reflect the person as more than a species of physical distinction. They reflect a desire to judge the worthiness of sports as not only the pursuit of physical superiority, but also on the other side of the Aristotelian equation: moral excellence. During the 2014 Winter Olympic Games, Cathal Kelly,sports columnist for the Toronto Star, wrote a story about Canadian cross-country ski coach Justin Wadsworth, who gave a ski to Russian Anton Gafarov so that he could cross the finish line with some dignity after he broke one of his skis. Wadsworth is married to Canadian skier Beckie Scott. This is relevant as it relates to a similar story from the 2006 Olympics in Torino, in which Norwegian official Bjornar Hakensmoen gave Canadian cross-country skier Sara Renner a pole while she and Scott were racing in the team sprint. That action helped the Canadian pair place second, pushing the Norwegians into fourth. Hakensmoen explains, “This competition, and all competitions, it should be a fight. It should not be decided by skis” (Kelly).

The story about Wadsworth and Hakensmoen resonates because it sets them apart from their peers. The performance honoured the sport because it combined an elite calibre of technical skill and a demonstration of integrity. The focus of the results shifted away from a best time and towards two opponents who were able to achieve a level of excellence. Yet not all of the coaches watching Gafarov ran to him with a ski. Why did Wadsworth and Hakensmoen consider fair play to be of such importance while others did not? Would some of the coaches have argued that Hakensmoen broke the rules and interfered in the competition, giving the Canadians an unfair advantage? Is there etiquette unique to cross country skiing that implicitly required Wadsworth and Hakensmoen to behave as they did? Or, placing the interest of the sport above his own, did Hakensmoen merely acknowledge his esteem for the sport? (Simon 46-52)

Craig Clifford and Randolph Feezell in Sport and Character argue that sportsmanship doesn’t develop naturally; it needs to be taught alongside the rules. This report argues that sportsmanship honours the nature of sport because it mediates between the playfulness of the game and the seriousness of competition (13-5/34).

Bernard Suits defines a game as a “voluntary attempt to overcome unnecessary obstacles” (Suits 55). The player wins by using their whole body to find a solution to an illogical situation. Clifford and Feezell define the difference between a game and a sport as the intensity added through competition. Winning, they explain, becomes meaningful when contests are governed by rules and traditions that impose a sense of fairness. Sport becomes the mediator between playfulness and seriousness. A competition is described as an expression of human greatness because opponents are able to pit their abilities, experiences and skills against each other, thus achieving a greater level of development, self-awareness and expertise. The implication is that the agreement to participate is as important as the contest (Clifford & Feezell 13-6). Bernard DeKoven adds that giving a game any less than your all violates its conventions. He explains his vision of sport as a conversation between play and game. Play is defined as being creative and magical, while a game is understood as focused and mindful. A game is well played when these two opposing concepts are bridged (DeKoven 520-3).

Diana Abad, citing James W. Keating, notes that sport is more than a physical performance. It is also about an attitude, and therefore sportsmanship is defined as a moral code that requires specific behaviours from the players. Abad defines these behaviours as “fairness, equity, good form or honour, and a will to win” (32). Though the qualities of sportsmanship can been observed in play and games, the seriousness of sport, specifically the desire to compete, creates a field in which moral distinction becomes a true part of the process (Abad 28). Clifford and Feezell define the spirit of competition as a tension between the cooperative need for an equitable opponent and the respect required for this level of self-awareness, pitted against the intense desire to win at all costs. Respect, they note, is offered when a person is able to see beyond their own needs and interests. Sportsmanship then becomes the mediator between the rules, the understanding of the sport, and the finite strengths each individual holds to be competitive. The socially constructed tension sportsmanship carries means that it is not innate; rather, its nuances need to be taught as they occur outside of the strict adherence to the rules while honouring the essence and the excellence of the sport (15/18-9/21/34). 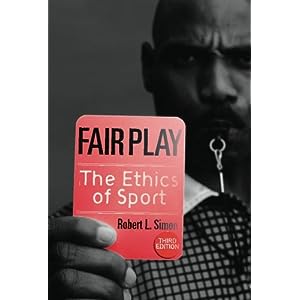 In opposition to sportsmanship, gamesmanship is behaviour in which a player seeks an advantage that might not be restricted but is seen as inappropriate. (Clifford & Freezell 39) Robert Simon notes that the nature of competition creates inequality: one player will win and the other will lose. Using an academic example, he notes that inequality is not always a negative thing; grades for example, are considered fair inequality (36-7). Feezell, in his book Sport, Play and Ethical Reflection, defines a cheater as a player who gains an unfair advantage by violating the essence of the sport. Examples include choosing to: disregard a rule (usually a moral one), injure an opponent, refuse to respect a defeat (84-5). Simon clarifies this position further when he argues that cheaters violate the moral norms because they “fail to respect their opponents as persons, as agents with purposes of their own” (55). The ethos of sport then becomes more than playing by the rules as it moves into an arena which also includes the pursuit of an outstanding character (Clifford & Feezell 17) (Simon 49).

Yet, though not considered fair play, breaking or bending the rules makes space to create an evolution within a sport. As part of play, sports are a dynamic and potentially magical experience, and rules are an element that allow for this fluid nature (Huizinga 57). Suits argues that the rules are not the only component of the sport; they are only the accepted method of framing the barriers of the game’s challenge (Simon 43). The rules are created for the play and our own pleasure within a specific game; therefore changing the rules can also restore the balance between playing and gaming (DeKoven 523).

We follow rules even when we are not playing games; hence there will always be rules that are morally valid and supersede a game rule. Though all sports contain basic rules of operation, the exact rules are rarely precise and are often connected to dynamic social and cultural traditions. Logically, sports will change over time because the players and organizers do (Suits177/181). Yet many people would argue that rules changes render some games unrecognizable.

How do players ethically change rules? Simon argues for an adjudication process in which criteria based in ethics research are used to interpret the rules and examine each individual rule-bending situation. He argues for a criterion to probe the elements of sport in which impartial respect of the sport’s core ideals are examined. Through the process commonly used within the field of ethics, rule changes would always be examined using a reasonable, reflective and critical response to the situation in question (Simon 14). John. S. Russell argues that moral justification for playing with sport rules is best when changes within the actual contest are vetted through a principled examination of the goals and intentions of the sport, to ensure these are maintained and nurtured (Simon 51-2). These changes are accepted when they are transparent and necessary to restore the balance within the sport (DeKoven 523).

By referencing the earlier 2006 Olympic example, the Canadian cross-country team would not have won without the gift of the pole. If the Canadian coach had replaced the pole, it could be argued that he had given his team an unfair advantage. Within this international amateur competition, the intention of the sport and the abilities of the skiers became the overriding factor in the ethical interpretation of the actions of the opponents coach (Feezell 88/100-4) (Simon 52-5). It is important to remember that games are socially constructed; it isn’t “the game that is sacred, it’s the people who are playing” (DeKoven 523) (Suits 179-80). In other words, part of the magic of sport is the capacity to play on multiple levels of the process. Sportsmanship is people on a quest to develop technical and moral excellence through sport. The competitors require a nuanced comprehension and respect for the interrelationship between each other, the objective of the contest, while attempting to master the most difficult challenge. Therefore, argues Feezell, the “key to sportsmanship is the spirit of play” (94).