A bunch of projects crossed our desk recently that are all about re-imagining the potential of urban space. 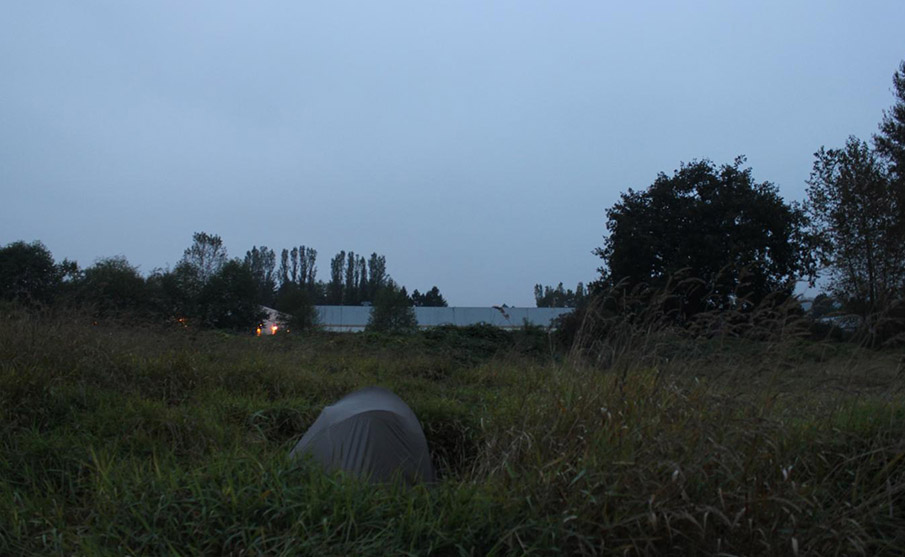 First off, here’s a project that is underway right now, for an undetermined length of time — perhaps a few days, perhaps more. One of our own, Jay White started out from downtown Vancouver yesterday, November 28, on a long, rule-based walk. You could help him along in some way by giving him a call at 1-778-319-2405.

This is the second of a series of walks he plans to undertake, heading eastwards from downtown Vancouver, according to certain rules, which in this case are:

In the first walk he did, he experienced a new connection to, but also estrangement from, the familiar urban environment:

In the first walk, I was struck by the vastly different perspective I had of an area that I’ve lived in for so long. I was also struck by the complete distance I felt from the people in my vicinity, and of my inability to share what I was experiencing in an immediate, direct and personal way. So this time around, I am inviting you to give me a phone call.[...] My cellphone number is 778-319-2405. No pressure!

He also reflected upon what he is ‘accomplishing’ through the walks.

The walks have a variety of meanings for me: They are an excuse to get outside, a means to use my whole body and mind to learn, to come to new understandings of the landscape and the beings that surround me. I’m also seeing it as a part of my art practice, as a means to create art, as art in itself, and as a program of research[...]. Above all, it is something I enjoy more than I ever would have imagined.

It’s a brave idea, putting oneself into a vulnerable situation in order to bear witness to the collective landscape. The project has all kinds of potential for observing transitions in how space is used as one moves from a dense urban landscape into suburban and then agrarian ones: a kind of moving through time and models of social organization as well as through space.

In other Vancouver news, last week another citizen took it into his own hands to help reshape our public space in the name of how it’s actually used. One day a new, seemingly official, Park Board sign appeared in a modest East Van park, renaming it from Guelph Park to “Dude Chilling Park.” The Vancouver Province reported on it, gamely describing the park as “a place where dudes and dudettes can presumably go to, you know, just chill — like the relaxed figure depicted in a sculpture on the park’s grass.” Apparently Park Board vice-chair Aaron Jesper praised the handiwork of the counterfeiter(s), and the Province‘s polling of passers-by also revealed acceptance of the new moniker: “Wendy Stewart, who takes a lunchtime walk around the park every day, was also surprised by the sudden renaming. Given the park serves as a hangout for the homeless, she thinks the renaming might be a form of social commentary. ‘You can see them there, sitting on the bench — they don’t have much,’ she said, adding a lot of families also come to the park to chill. ‘Dudes chilling is OK.’”

Then came the social media campaign. People posted pictures, and a dude named Dustin Bromley started a change.org petition to Mayor Gregor Robertson, to permanently change the park’s name, arguing that it has been “under appreciated, and mostly occupied by empty bottles of mouthwash”, but that could become a destination. Within a few days, the petition had gained 1500 signatures, and the fate of Dude Chilling is now being debated in local and social media. (We sent a suggestion that it could come live in the yard of the League field house in Elm Park.) According to Park Board commissioner Sarah Blyth, it’s on the agenda for the Park Board’s December 10 meeting.

It turns out that the sign was the work of artist Viktor Briestensky, as the Province reported in a follow-up article.

Whatever the eventual fate of Dude Chilling, it succeeded in playfully reminding us that we could all have a part in shaping public space into the forms we’d like, that communal space comes to have its own meanings through use, and that there’s nothing fixed about the space around us.

New York City “prank collective” Improv Everywhere was at it again on Black Friday. Masters of twisting expectations and disrupting habits in urban space, this time they had 100 people camp out in front of a 99-cent store in the early morning of Black Friday, the biggest retail sales day of the year in the United States. “When the store opened, the crowd rushed inside and made purchases, buying 99 cent items with glee. Actress Cody Lindquist posed as a local NBC news reporter and conducted interviews with confused and delighted store employees and passersby.”

Thank you, Improv Everywhere, for creating one joyfully absurd moment to balance the make-you-despair-of-humanity stories of consumer greed that are otherwise the annual Black Friday news fare.

Inhabitat reports on a prototype trampoline sidewalk “built by Estonian firm Salto Architects for the Archstoyanie Festival this summer in Russia. During the festival Fast Track was used for both play and transport, giving visitors a different way to get from one place to another.”

That brings to mind the slide installed at the Overvecht train station in Utrecht. As described last year by the Pop-Up City blog, “the slide offers travellers the opportunity to quickly reach the railway tracks when they’re in a hurry. But above all, the slide is a great instrument to make the city more playful. The ‘transfer accelerator’ was designed by Utrecht-based firm HIK Ontwerpers, and installed as the final piece of the renovation of the Overvecht railway station.”

Here’s a project by Brooklyn collective DoTank, who are working to improve the commons through “tactical urbanism” projects. It’s a sort of recipe for improving the livability of public space.

Chair-bombing is the act of building chairs out of found materials, and placing those chairs in a public space in order to improve its comfort, social activity, and sense of place.

DoTank’s chair-bombing process began by building adirondack chairs made from discarded shipping pallets. The DIY chairs were placed in public areas that were in need of street furniture. These places included sidewalks in front of coffee shops, transit stops with no seating, and other areas with potential to become quality public spaces, but were suffering from a dearth of public amenities.

[Thanks to Maia and Andreas from Grey Sky Thinking for the lead.] 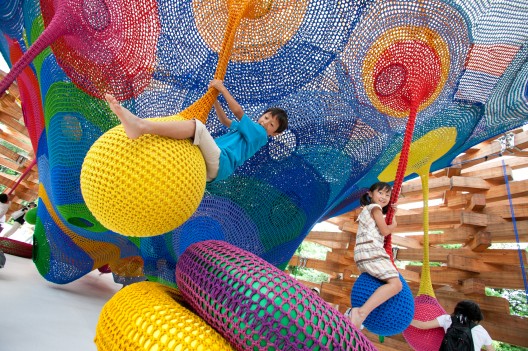 ArchDaily posted a profile of artist Toshiko Horiuchi MacAdam, who makes brightly coloured, hand-knit installations and public spaces. Inspired by natural architectural forms and her own background as a textile designer, her practice has developed through a sensitive observation of materials and forces. Her approach sounds like play: “Most of my artwork involves architectural ideas or references. I am interested in how form is created through tension and the force of gravity including the weight of the material itself and textile structures. It is the intersection of art and science – like geometry – which we observe in nature. ”

[Thanks to architect Carla Smith for the lead. Go check out her coaching project Roller Derby Athletics.] 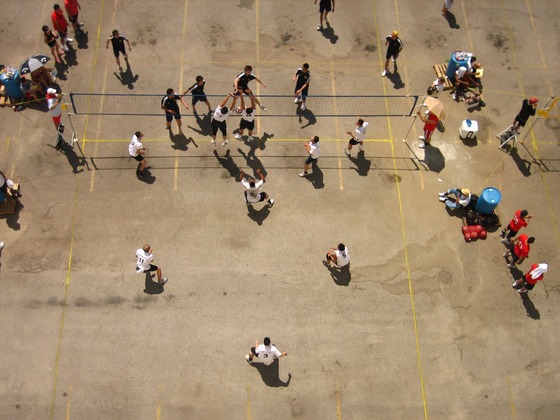 And lastly, here’s a Kickstarter campaign for 9-Man, a feature documentary directed by Ursula Liang, about an extremely localized street version of volleyball played in Chinatowns since the 1930s. Playing against stereotypes and segregation of Asians, it was a game that developed in isolation within large cities.

9-MAN is a streetball game played in Chinatown by Chinese-American and Chinese-Canadian men. It’s fast, chaotic, unpredictable, grueling; the rules are distinct and exist no where else in the world—imagine volleyball with 18 guys, dunks, and bloodied elbows. This is a sport that is completely unique to Chinese-Americans and therefore something very special to those who play it. Why haven’t you heard of it? Because it’s played only by men. And two-thirds of the players have to be “100% Chinese”. And perhaps because good things are often kept secret. If you’re not part of the 9-man community, you may have no idea what an incredible scene it is. We’re trying to change that.

The documentary promises to reveal something of the particular social conditions that this particular sport grew out of. If you want to help the film get made, head over to their Kickstarter page before December 21 to give them a hand.